This is quite a rare beast.

According to Tom Presley this was an unsuccessful prototype and was never productionized because of resonance problems.
Consequently, it is not mentioned in any of the catalogues or price lists.

For a long time, we knew only of this one 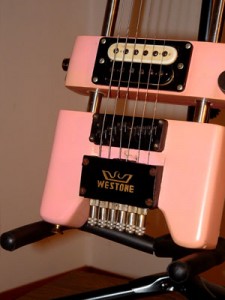 Pink colour aside (not likely a factory finish, but who knows?) this example shows different construction and electronic ideas from the black version above which looks closer to the Rail bass. This is an obvious prototype, and an earlier one by the look of it. The owner describes it like this:

Even though the scale from nut to bridge is identical to the other guitars, there’s hardly any body at all, and the delicate faded pink paint over wood makes it feel like… like vintage furniture, or like a beloved child’s toy faded with years! The color is odd- I really wonder if it was original, it looks like it. The guitar is so small and light…
… this thing is beautiful, but in truth it’s crude. The bridge is not metal, but is basically a wood & plastic box with screws on one end (together so closely they barely have room to turn) that pull on little wooden slugs that the string balls fit into- that’s what’s hidden under that bridge cover. The saddles are likewise wood, and not even attached, but wedged under the strings like shims. The whole thing feels so fragile, not like a rail bass, which feels like a club- it screams ‘prototype’ to me

We would agree with that conclusion. The surface mounted humbucker is a dead giveaway, and even the Westone logo is not a correct rendition but rather an ad hoc one, likely for positive identification within the Matsumoku plant since they were also building other branded instruments at the time under the Aria Pro II and Vantage labels, among others.