19?? – 1975—Westone instruments made for companies in the German Democratic Republic and Italy-but not by Matsumoku

1983 to 1984—SLM becomes USA distributor, some design input for the US market. See USA Development History below.

1997—FCN imports new Korean made guitars (WE1000, We1052) and to try and resurrect some earlier models but have no success

1998—Sid Poole Westones made by Status Graphite in limited numbers

2002—A German company, Musik-Meyer, produces cheap Gibson/Fender copies. (more about them at the Westone Forum HERE)
We think FCN made the BC Rich copies and electro-acoustic models

This information is taken from a post on the Westone Forum by Tom Presley, designer for Westone, Westone-Electra and other labels, during the innovative days of the Matsumoku period of production. The presentation has been formatted for easier screen reading but it remains copyright Tom Presley and no part of it may be reproduced without his express permission:

eBook! The History of Matsumoku

An in-depth history of Matsumoku researched and written by Japanese writer and Matsumoku.org forum member, TAD, translated from Japanese and released here as an eBook download!

Get your eBook HERE

The Westone Story in words and  pictures—The History of Westone

A brief recap of the  The Guitar Magazine January 1997:

Westone—Background to a Breakthrough. Covers the years 1981-84:

This is an interesting and informative article from the Music UK Guitar Special 1984 on the origins of the Westone guitar brand and the manufacturing process. Includes exclusive pictures of guitars being assembled at the Matsumoku

Matsumoto City and the Matsumoku Memorial

A map and historical pictures of the city and factory where Westones and other famous labels were made. Also pictures of the factory site today and the granite memorial commemorating the Mats legacy. Read about it here.

And extending the story to the start of 1985… 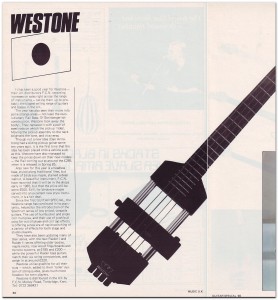 Read about it, in his own words, HERE